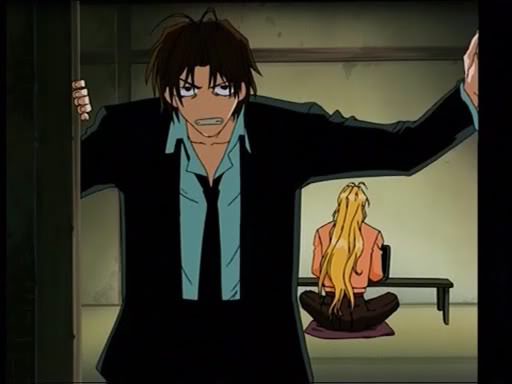 Here are Daisuke's tapes in case you get lost and need a reference back. There will be more tapes to come.

March 4th, 1983. I donâ€™t know where to begin on this. But, my name is Kimoto Daisuke. Iâ€™m eighteen years old and a single dad. My daughter, Anna, was brought to me three days ago by hospital officials from Sapporo, Hokkaido. As you can expect, I donâ€™t know what to do. Thatâ€™s not my only problem, however. *Sighs* I donâ€™t knowâ€¦ This was my roommateâ€™s idea. Iâ€™m more lost doing this than before I started. Still, I have to keep going. So, here goes.

My life is a mess. I have many dark secrets. *Pause* Itâ€™s my family. *Whisper* They are the Eda-Kimoto clan. Yes, thatâ€™s right. I am a warlock descended from a long line of witches. My heritage dates back to the Nara period as I have been told many times. We employ foxes. My family is kitsune-tsukai. According to our history, our ancestor, Sen, was to marry this beautiful farmerâ€™s daughter. Her name escapes me at the moment, but anyway, she was always a sickly girl. Many thought that she would die soon. Afraid for her life, Sen desperately searched for a way to save his fiancÃ©e. Thatâ€™s where the story changes.

Sen made a pact with a powerful kitsune. This kitsune would save his wife-to-be if every forty generations; a daughter would be given to the great kitsune as payment. Sen agreed and thus the birth of our bloodline.

We started out benign at first. But somewhere in the Meji Era, our family became corrupt with blood and power.

I think my mother killed my sisters. I know that she did. I know how she and my brothers are. Iâ€™m not surprised that they would stoop so low! I donâ€™t know the exact details just yet. But all I know is this:

March 21st, 1983. My name is Kimoto Daisuke. I am eighteen years old and a single father. I have come to a realization last night. I canâ€™t get away from my past. Itâ€™s time I finally came out and said it. I apologize to Anna in advance when she hears this tape. The truth may be ugly and hard to swallow. But it just has to come out. Iâ€™m so sorry, Anna.

My mother is Kimoto Haruka. She is Satan in human form. For all of our childhood, she gave us Hell. Mother was a complete bitch. No, she doesnâ€™t deserve to be called â€œmother.â€ She is a monster. Haruka had creative ways of torturing us. One time, Shichiro snuck out to see his then-girlfriend that Haruka didnâ€™t like. She found out be morning. The girl had a flaming dead cat on her front porch later that evening. My brother ended up being handcuffed to his bed from then on. Iâ€™m not done yet. It gets worse.

Haruka tricked Kirika into feeding a neighborâ€™s dog that she didnâ€™t like poison. This was a seven-year-old girl unknowingly killing an innocent dog that barked too much. By the time Kirika realized what had happened, I was too late. She ran to me crying afterwards. Haruka slapped us around constantly. I always woke up to her yelling at my brothers. She seemed to hate that we existed at all.

Looking back, I donâ€™t understand how we took such abuse. It makes me sick. Whatâ€™s worse is my so-called â€œbrothersâ€ took it and still tried to make her happy. I didnâ€™t realize that until one day in June of last year. I woke up to silence that morning. Right then, I knew something wasnâ€™t right. So, I got up and wandered around the house. Suddenly, I noticed smoke out the window. Curious, I looked and noticed Kirikaâ€™s bunny rabbit being dropped into a fire pit along with a few other things. It didnâ€™t take me long to realize that Haruka was burning my sistersâ€™ things. I raced outside to stop her. Do you know what she said when I asked her what she was doing? Let them go and forget about them. Forget about my sisters? Like hell I would! I tried to stop her, but Yasuo tackled me to the ground. As I tried to fight him off, Nobu told me, â€œMake this easier for yourself.â€ Make this easier for myself? Make this easier for myself? How could he be so blind? It became so clear to me from that moment on. She did it! Kimoto Haruka and her sons killed my sisters! I couldnâ€™t take her cruelty anymore. Suddenly something inside me snapped. I pushed Yasuo off of me and ran to my sistersâ€™ things. I only managed to save their birth charms. For that, I took a serious and violent beating from Haruka. Did my brothers help me? No! They just stood there and watched me get beaten by her. As the blows got worse with my tight grip on the charms, the notion of a hellish prison became dead clear to me. I had to get away from my family.

So that night, I packed up my stuff and ran away from home. I havenâ€™t been back to Kobe ever since.

March 29th, 1983. My name is Kimoto Daisuke. I am eighteen years old and a single dad. Anna-chan reminds me so much of Kirika. Both were quiet little babies. They were only fussy when they were hungry. Both my sister and daughter looked like smart babies. I thought Kirika would grow up to be a doctor. I think Anna will be a doctor when she grows up. Or a teacher. So many possibilities. *Pause* But yet, something still bugs me about Kirika. Haruka came back with her without dad that March morning. We still donâ€™t know what happened to dad. Haruka wonâ€™t tell us anything. Some people think dad is dead. He hasnâ€™t called or written to us since he and Haruka left us all alone. So, I have to wonder. *Pause*

Saying all of that brings me to my question: Who is Kirikaâ€™s father?

April 7th, 1983. My name is Kimoto Daisuke. I am eighteen years old and a single dad. I am in fear of my daughter. She could grow up to be a monster. Sheâ€™s a baby now, but stillâ€¦

There is no way to tell which girl will inherit the mother kitsune. Our powers donâ€™t manifest until our teen years. But what if hers manifest sooner?

Itâ€™s silly to be afraid of a little baby like this. But, I canâ€™t help it. I donâ€™t even know what to do if she has the Mother. I donâ€™t want to kill her. That would make me no better than Haruka.

August 1st, 1988. My name is Kimoto Daisuke. I am twenty-three years old and a single father. Summer is here. That means Anna-chanâ€™s out of school now. Uh-oh, guess Iâ€™ll have to keep that little bit busy for the whole break. *Laughs* This will be another good summer. I hadnâ€™t had this much fun since the 70â€™s. Great times! Nowâ€¦ *Pause* All I have is the memories. I see them in my Anna-chan. Seeing her little face reminds me that life can be okay at times. Anna-chanâ€¦ My little soldierâ€¦ Sheâ€™s become my motivation to survive my bloodline. My little solderâ€¦

October 28th, 1999. My name is Kimoto Daisuke. I am thirty-four years old and a single dad. For sixteen years now, I have been recording this journal. I have revealed some unsavory truths on countless numbers of tapes. Iâ€™m not proud of them, but they had to come out. I didnâ€™t choose my fate or conditions. My biggest apologizes go to Anna-chan. She didnâ€™t deserve any of my Hell. Iâ€¦ I never wanted this for her. She deserves a normal and happy life. Sadly, that wonâ€™t happen for her. All because of our heritage. We are all cursed because of it.

One day, Anna-chan will hear these tapes. When she does, I will regret everything that I have ever recorded on them. I know, however, I canâ€™t keep her innocent forever. Anna-chan would have to learn the truth sometime.

For that, I am so sorry, Anna-chan.