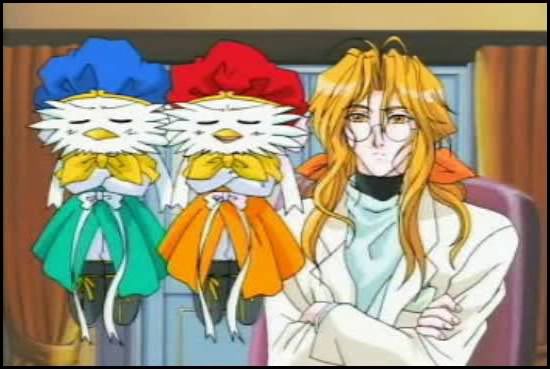 Just some words to help out with the series.

Akuma Baraishi: Someone who exorcises demons.

Bushi: A broad term that describes an aristocratic warrior of pre-feudal to feudal Japan. When he was still alive, Hisoka was trained as one. The Samurai fall within the category of Bushi, but they were by no means the highest rank.

Bushido: "WarriorÃ¯Â¿Â½s Way." It is a system of codes and moral traditions followed by the warrior class of Japan in which justice, courage, benevolence, honor, truthfulness, politeness, loyalty, and self-control are emphasized.

Celestial Emperor: The ruler of Gensokai.

-chan: Honorific used to connote affection, familiarity or used when addressing a child.

Chijou: The land of the living.

Danna: The master of a household.

-dono: Honorific connoting respect, above Ã¯Â¿Â½san but not as high as Ã¯Â¿Â½sama.

Enma (Enma-dai-oh): "Demon of darkness." The ruler of Meifu who judges the souls of the dead.

Enma-Cho: "Enma District". It is in the 5th district of Ju-Oh-Cho, controlling only the Tokyo territory and is the main judicial center in Japan. It's ruled by Enma himself and the Shokan is based there.

Fuda: The shortened form of 'Ujikofuda,' it is a long rectangular paper "charm" that is used as a harness for summoned energy. They are used to cast some spells and the most common language to be written on them is sanskirt.

Futon: A Japanese style bed, which consists primarily of a slim mattress laid on the floor that is often rolled up and put away during the day.

Gensokai: "Illusory World." It is the world in which the Shikigami live. It was originally a dimension that existed parallel to that of Chijou, but disruptions in Chijou were mirrored there and it became unstable so the dimension was moved into cyber space. There are four gates to get in, one in each direction. Wakaba can open the Suzaku gate.

Hakushaku: Translates to "Earl." From the Castle of Candles he controls the life spans of the living.

Hoan-Ka: The peace preservation bureau. This peace- maintaining group is made up of combat specialists who are in charge of the safety of Ju-Oh-Cho.

Ichizoku no Chou: The head of a Clan.

Ju-Oh-Cho: "Ten King District." Ruled over by Enma, it is a bureaucratic organization within Meifu, which is concerned with the judgment of souls in Japan.

Kekkai: A shield of manifested energy.

-kun: An honorific often used among boys, but also used by elders or superiors to connote the younger ones diminutive status.

Kyudo: A form of archery indigenous to Japan.

Meifu: The land of the dead. Its appearance is an exact replica of Chijou, the living world. A major difference being that it is always spring in MeifuÃ¯Â¿Â½ Another major difference is that living people inhabit Chijou, while Meifu is inhabited by the souls of the deceased that for one reason or another have not passed to either Ã¯Â¿Â½HeavenÃ¯Â¿Â½ or Ã¯Â¿Â½HellÃ¯Â¿Â½. (It is difficult to explain this due to the fact that the original Japanese series correlates with Buddhism, while the English adaptation of Yami no Matsuei explains Meifu in a more Christian sense.)

Nyngyou: Doll (The title that Muraki likes to use when referring to Hisoka.).

Onmyodo: It is an ancient Chinese art of Taoist sorcery and astrology, based on the principles of Yin and Yang (opposites that work in perfect harmony.) It is deeply concerned with a harmonic balance with nature.

Onmyoji: A practitioner of Onmyodo. A sorcerer, diviner and astrologer all rolled into one.

Rousoku no Yakata: Also known as The Castle of Candles, or The Mansion of candles. This is where Hakushaku tends the life spans of the living.

-sama: An honorific connoting something akin to "Lord" or "Lady."

-san: An honorific that represents "Mr." or "Mrs."

-sensei: Ã¯Â¿Â½Expert.Ã¯Â¿Â½ This honorific can be added to anyoneÃ¯Â¿Â½s name that is an expert in his or her field.

Sensei: When it is used as a noun, it usually refers to a doctor or teacher, but still holds the same meaning of Ã¯Â¿Â½expert.Ã¯Â¿Â½

Shiki: The shortened form of 'Shikigami'.

Shikigami: "Ceremonial God." Summoned deities with two forms: a summoned, battle ready animal-like manifestation and a human-like avatar. They all reside in Gen-So-Kai. There are two types of Shikigami: Summoning types that need a long, energy-packed chant to come forth, and Parasitic types that come out automatically when necessity calls for it.

Shinigami: "God of death.Ã¯Â¿Â½ Sometimes referred to as "Guardian of Death". Name for the 18 Shokan employees who work directly for Enma-Daioh.

Shokan / Shokan-Ka: "Summoning Division." It is a division within EnmaCho. It refers to the fact that this division summons the dead souls that have yet to appear for their court date in Meifu. The Shokan only act when the soul does not come automatically come to Meifu.

Tsukaima: Ã¯Â¿Â½Messenger Magic.Ã¯Â¿Â½ It is a magical creature made with a Fuda. It is used for specific tasks, including delivering messages, offensive attacks, searching, etc.)

Yatonokami: "God of the Night Sword.Ã¯Â¿Â½ This is the kami that Kurosaki Ren killed in order to save their village. The Kurosaki family was repaid for their bravery by being cursed by the kami.

Yumemi: "Dreamgazer." One who can walk through the dreams of others and also view the future in dreams.