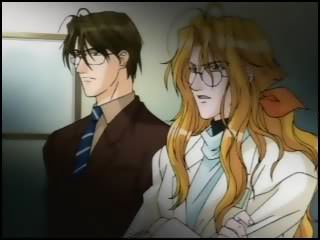 Episode One: The Nagasaki File Pt. 1

A series of vampire killings in Nagasaki lead Asato Tsuzuki to a confrontational encounter with his new partner, Hisoka Kurosaki. As the two try to cope with working together as guardians of death they must also figure out who is responsible for the supernatural attacks.

Maria Wong is revealed to be the attacker responsible for the Nagasaki attacks, however her life after death was not without the helping hand of another. As it becomes clear that the mysterious Dr Muraki is involved in the supernatural goings-on, Tsuzuki learns that Maria Wong is not the only one he should be concerned about.

Tsuzuki rushes to the aid of Hisoka, who has been captured by Dr Muraki, however during the confrontation he discovers the shocking truth behind Hisoka's death. As the two partners are reunited they are thrown into working together as Muraki attacks, trying to force the pair into submission and preventing them from escaping.

Hijiri Minase's joy at being able to play the violin again thanks to a donated cornea fades as his precious instrument is destroyed in a fire. Offered a replacement by Kazusa, the daughter of the cornea donor, little does Hijiri realize the secrets that the violin holds or that the true despair is only just beginning.

Hijiri is crushed to learn that by receiving Tatsuya Otonashi's cornea he has been entered into a contract with the devil that will culminate in the death of both Hijiri and his close friend, and Tatsuya's daughter, Kazusa. Determined to defy the pact, Hijiri tries to go on with life as normal but soon discovers this is not an option and that the assistance of Tsuzuki and Hisoka may be his only solution.

Despite what he may believe, Hijiri Minase's contract with the devil is far from over and now Tsuzuki, under the devil's control, is looking to fulfill both parts of the contract. Distraught at his friend and partner's suffering, Hisoka set a plan in motion with the hopes of freeing Tsuzuki from Sagatanas' control, however the risks are great for all involved.

A request from the Count himself leads Tsuzuki and Hisoka to the Queen Camellia cruise ship to investigate its ties with the mysterious longevity of a number of people who were due to die. Once on board, Hisoka finds himself drawn to Princess Tsubaki, the daughter of the ship's owner, while Tsuzuki is horrified to discover an old acquaintance alive and well. As one of the passengers is killed, suspicions turn to all directions but Tsuzuki and Hisoka have one particular suspect at the top of their list.

The serial killings take an unexpected turn as Dr Muraki becomes the second victim. Tsuzuki and Gushoshin attempt to unravel the mystery of the Tarot Cards left at each killing, however Muraki's card, the King of Swords ripped in two, leaves them stumped. Hisoka, meanwhile, furthers his friendship with Princess Tsubaki but uncovers some shocking truths in the process.

Dr Muraki's miraculous return from the dead helps Tsuzuki and Hisoka unravel the mysteries of the Tarot Card murders, however the truths they uncover are not easy to stomach. With Princess Tsubaki under Muraki's control, Hisoka is forced to fight his new found friend in order to save her from her torment, but will the power of the Guardians of Death be enough to save this victim from her fate?

A serial killer taking a lock of hair from each victim leads Hisoka and Tsuzuki to Kyoto, Watari's home town. When a lock of the murderer's hair is found at the scene of the latest victim, the pair discover that their criminal is none other than Dr Muraki and a run in with the evil doctor leaves Tsuzuki battling with memories of his past. However Muraki knows more about Tsuzuki's past than he is letting on, and what Tsuzuki doesn't know could just be his downfall.

The case takes on a new turn as Watari discovers that Dr Muraki has been regularly visiting his old mentor from Shion University, Dr Satomi. When Tsuzuki and the others pay the university doctor a visit he seems oddly curt with them, distracted to meet in person the mysterious immortal who Muraki showed him in a 72-year old photograph. Things go from bad to worse when two girls from the high school, Maki and Mariko, are attacked by Muraki leaving one of them dead.

Wracked with guilt after Maki's death, Tsuzuki and the others take up jobs at Mariko's high school in order to protect her, however she is terrified that the Guardians of Death actually want her dead. Meanwhile Muraki, intent on using Tsuzuki's body to take revenge on his own step-brother Saki Shudo, will do anything to claim his prize, even putting more innocent souls at risk.

Muraki asks his old friend Oriya for one last favor; to distract Hisoka and the others for as long as possible so that he can finish what he needs to do with Tsuzuki in private. As Hisoka, Watari, and Tatsumi arrive at Kokakuro, Oriya refuses to give up the entry card without a fight so a sword battle between the two protectors. Meanwhile Tsuzuki slowly recovers from his mental anguish, remembering his past and wondering whether he was ever truly meant to exist in any form, human or otherwise.